This website is supported by its audience. When you buy through our links, we may get a commission.

If you had to describe the P155, Yamaha’s take on a fully functional, keyboard style digital piano, in one word, versatile would be the most obvious choice. This piano is portable enough and has enough features to accommodate stage performances while its great acoustic sound and realistically touch sensitive graded hammer keyboard make it an equally great choice for learning to play the piano on.

Combine this versatility with an attractive design and an affordable price and you have an instrument that is well worth consideration for pros and beginners alike. In this Yamaha P155 review, we’ll take a look at the various features and specifications of this piano, as well as its sound quality, key action, and various pros and cons. 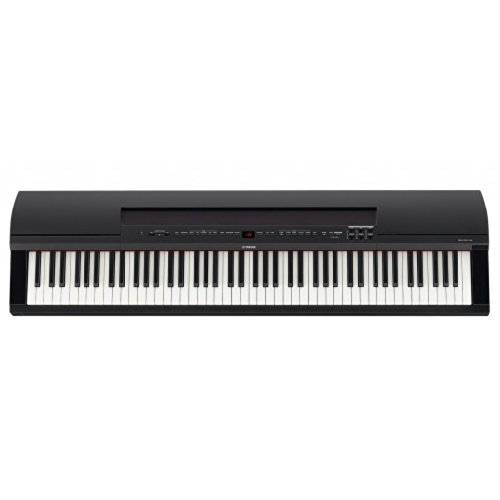 Again, the versatility of the P155 is its primary advantage. There are a lot of digital pianos that are portable, and there are a lot that sound and feel great, but very few that are both. The P155 is one of these exceptions.

For a digital piano that is made to be portable, the P155 is quite heavy. At twenty-six kilograms, it’s not nearly as light as some keyboard style digital pianos, and while this is a necessary sacrifice to achieve the piano’s quality in other regards, the added weight can sometimes be a bother.

Sound Quality of the P155

Using sonic CFIIIS technology to record samples from their acclaimed 9 foot concert grand piano, Yamaha was able to equip the P155 with a sound that is wonderfully realistic for a digital piano. Having played the P155, I can say from personal experience that there simply aren’t many keyboard style digital pianos that sound as good as this instrument.

The two 12 watt speakers are plenty substantial enough to pump out the volume, and the acoustic piano sound the P155 is capable of is very realistic.

On top of this, the P155 is capable of producing 128 notes of polyphony, meaning that no notes will be cut off prematurely no matter how complicated a piece you are playing.

Key Action and Realism of the P155

The key action of the P155 is hard to rival. Yamaha has equipped the piano with their acclaimed Graded Hammer Action keyboard, meaning that the resistance when each key is pressed accurately mimics the varying hammer sizes in an acoustic piano.

On top of this, the P155 has a feature dubbed the Note on, Note off feature that replicates the reverberations an actual string makes when the hammer is lifted any time the key is released. Further enhancing the realism of the instrument is its four different levels of touch sensitivity, meaning that four separate volume recordings are played depending upon how hard the key is pressed.

Lastly, the keyboard of the P155 is made out of synthetic ivory, making it able to better absorb the sweat from your fingers, feel more realistic, and have less unwanted sound than the plastic keys usually found on pianos in this price range.

Other Features and Specifications of the P155

Other quality features of the P155 that bear considering are its 17 included voices to accompany your playing, a chorus effect and 3 types of brilliance effects, 2 separate headphone jacks, (which come in very handy when playing along with a teacher or friend) MIDI and USB connectivity, a built in metronome, a 2 tract recorder that is capable of recording 3 songs at a time and can store 100KB of user songs and 447KB of external songs (a considerably large amount of storage for this piano), a FC4 Foot Switch sustain pedal and the option to add more pedals as well, 50 separate preset songs, an attractive and easy-to-use LED display and a 3-year manufacturer’s warranty on parts and labor.

The weight of the P155 is twenty-six kilograms—a little on the heavy side for a keyboard style model but still entirely portable—and is available in three different finishes: satin black, mahogany, and cherry.

What sets this piano apart is that it performs well in all three aspects, making it equally suited for stage performances and piano lessons alike. Factor in its price, its attractive design, and its nice list of features and you have a digital piano that we would certainly recommend.