For many years, Roland has been making expensive, high-end digital pianos for those who want only the best in terms of sound, feel, and outward aesthetics. Unfortunately, the pianos come with a hefty price tag that most people simply cannot justify.

To fill this gap, Roland has introduced the F-120, a piano that still has many of the great features found on the company’s higher end models and is able to cut costs without losing Roland’s attractive design. In this Roland F-120 review, we’ll take a look at these features, as well as the pros, cons, sound quality, key action, and various other specifications of the instrument. 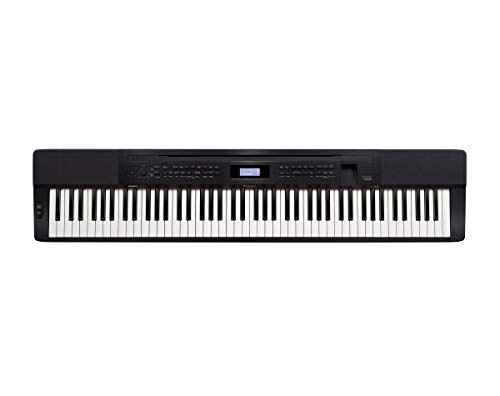 The primary advantages to the F-120 are its useful features (such as dual headphone jacks, Twin Piano mode, input jack, and a nice list of instrument sounds to choose from) and its realistic sound.

The main disadvantage to the F-120 is that some have found its key action to be a little too clunky and heavy to be entirely accurate. While acoustic pianos themselves certainly have heavily weighted keys, the F-120 may have overdone it just a little in this area.
[/su_box]

The sound of the F-120 is actually quite phenomenal. Roland’s acclaimed SuperNATURAL Piano sound engine ensures that the piano recordings the F-120 is equipped with are as close to the various nuances of an acoustic piano’s sound as you can get, including a nice, subtle echo that is easily appreciated.

While the two, 24 watt speaker system of the piano isn’t eardrum-bursting loud, it’s capable of plenty of volume for anything short of a concert performance.

One other nice thing about the F-120 that many digital pianos cannot boast is the fact that most all of the other instrument sounds it comes with (organ, harp, choir, guitar, and strings just to name a few) have just as high quality a sound as the acoustic piano tones.

The F-120 is capable of 128 notes of polyphony, meaning that it can play most any piece without cutting off any of the notes prematurely.

Key Action and Realism of the F-120

On an acoustic piano, the keys (especially the lower end ones) have a surprising amount of resistance when pressed. To replicate this tactile sensation, Roland has equipped the F-120 with a very heavy key action. While some find the keys of the F-120’s Ivory Feel-G keyboard to be a little too heavy for their preference, they really aren’t that heavy when compared against the acoustic piano they are striving to replicate.

For people who are used to playing on an acoustic piano, the F-120 should provide a very smooth transition. For those who are used to the lighter keys of other digital pianos, the weight of the F-120’s key action may be slightly more of an issue.

One thing about the keys of the F-120  that most anyone will appreciate is their synthetic ivory texture that absorbs moisture better, feels more natural, and produces less noise than less-expensive, plastic keys.

Other Features and Specifications of the F-120

One feature of the F-120 that is relatively unique to this instrument is a built-in external input that allows you to connect a music player to the instrument and play songs through the F-120’s speakers. This is really nice for playing along to music of your choice.

Another really nice feature is the F-120’s Twin Piano mode, which splits the keyboard into two sections that are the exact same octave range and converts the leftmost pedal (normally the soft pedal) into a second damper pedal. This feature is very useful for duets or for allowing a teacher to demonstrate something along with the student.

Other useful features of the Roland F-120 include a headphone jack and an included hook for storing your headphones, a MIDI connector that lets you connect the instrument to a Mac or PC, a built-in metronome and recorder, thirty different quality instrument sounds to choose from, auto-off functionality, and built-in lesson songs.

The F-120 comes in two attractive finishes (white and satin black) and weighs thirty-four kilograms. At this weight, it’s no feather, but the piano is still portable enough to accommodate most users.

For the money, there aren’t many digital pianos more attractive and better sounding than the Roland F-120. The beautiful finish and attractive cabinet design give the piano a modern, classy look while the SuperNATURAL sound engine gives it a wonderfully realistic sound. While the key action may take a little getting used to and can seem a little clunky at times, it’s still comes very close to replicating the feel of an acoustic piano, making it great for someone wanting a traditional, realistic experience.

Like all Roland pianos, the F-120 is a pleasure to hear and an even bigger pleasure to own.

Disclosure: PianoReport.com is a participant in the Amazon Services LLC Associates Program, an affiliate advertising program designed to provide a means for sites to earn advertising fees by advertising and linking to Amazon.com

Scroll back to top