The Yamaha P35 is the definition of an affordable and portable digital piano. Weighing just 16.2 kilograms, the P35 is a great instrument for beginner or intermediate pianists who transport their instrument a lot and who also don’t want to spend a small fortune on a digital piano. Despite its weight and cost, the P35 is still a full sized, eighty-eight key piano, with plenty of features to offer. In this Yamaha P35 review, we’ll take a look at these features, as well as the pros, cons, and other specifications of the instrument. 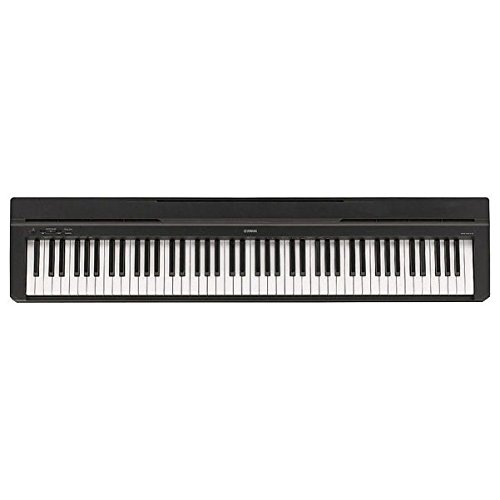 As mentioned, the main selling point of the P35 is that it is inexpensive and portable. Beyond this, though, a second big advantage of the P35 that’s usually only found on furniture model pianos is its touch responsive pedal.[/su_box]
[su_box title=”Cons” box_color=”#891212″]
The P35 has somewhat of a “plastic-like” feel to its keys and its key action is sometimes a little gummy in its response. Another drawback to the P35 is that is only capable of thirty-two notes of polyphony.
[/su_box]

Sound Quality of the P35

The general consensus of the musical community would be that to get a digital piano capable of producing a great acoustic sound. While there is a degree of truth to this, there are several options for much less that get it very close. The P35 is one of these models.

While its sound isn’t perfect, it’s plenty great enough that only those with a highly trained ear for an acoustic piano will even notice. One of the primary ways that the P35 is able to achieve the quality in its sound is through Yamaha’s AWM (Advanced Wave Memory) technology. To drastically simplify, this technology involves recording pairs of waveforms by using two separate microphones.

The end result of this system is a fuller, more spacious acoustic sound. One of the only things holding back the sound of the P35 is the fact that is only capable of thirty-two notes of polyphony.

Taken into consideration that this piano is meant primarily for beginners and intermediates, however, most people who are playing it will not be playing a piece complicated enough for this shortage of polyphony to be an issue at all.

Key Action and Realism of the P35

Graded and weighted: these are the two descriptions that you always want to look for when assessing the key action of a digital piano. Generally, they are difficult to find on a less-expensive piano, but that is not the case with the P35. This alone sets it well apart from most pianos in its price range.

Unfortunately, there are a couple complaints regarding the key action of the P35. One of these is that the keys are not textured and feel too slick and plastic-like, despite the being graded and weighted another complaint is that the action sometimes feels gummy.

In all honesty, however, most online reviews you will read about P35 don’t even suggest that users were ever bothered by these issues.

Other Features and Specifications of the P35

There are several important features of the P35 left to consider. One of these is that does come with MIDI outputs, allowing it to be connected to a computer for transferring files or downloading apps.

A second nice feature of the P35 is the fact that it does come with a quality pedal, one that is responsive to how hard it is being pressed. Other bonuses of the P35 include ten demo and ten piano songs, ten different instrument sounds to choose from, and a lengthy three year warranty on parts and labor.

The P35 is, beyond a doubt, the quintessential beginner’s digital piano, with plenty enough sound quality and a realistic enough key action to make it a good choice for intermediate pianists as well. It has a few flaws, but it also has two massive advantages in its price and portability—a combination that many find to be perfect for their needs.