The PX860, the flagship of Casio’s esteemed Privia line, is just about as close as a digital piano can possibly get to replicating the sound and key action of a quality acoustic piano. So much consideration was given even to the minutest details, many of which most digital pianos overlook, that the end result is a sound and experience that can only be truly appreciated by sitting down behind a PX860 and playing it for yourself. In this Casio PX860 review, we’ll take a look at the details that set this piano apart, as well other features and specifications of the instrument. 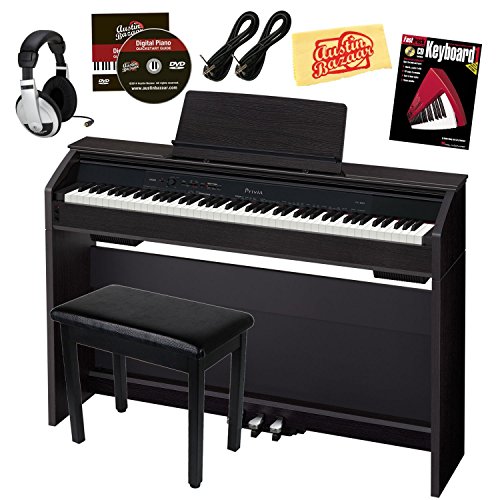 Incredible sound and realism achieved by attention to detail really is the number one advantage of the PX860. Another pro of the piano is the fact that it weighs only thirty-seven kilograms, making it highly portable for a furniture style digital piano.

Some have complained about breaking the legs and/or box of the piano, however, since the PX860 is covered under a one-year warranty this isn’t nearly as big an issue as it would have otherwise been.

Sound Quality of the PX860

Across the board, pianists of all skill levels who’ve had the opportunity to play the PX860 will tell you that the sound of the instrument is absolutely superb. This consensus is no accident: Casio took painstaking measures with the PX860 to make sure this was the case.

One of these measures is the updated Acoustic and Intelligent Resonator Sound Engine, which records samples using four separate dynamics to stimulate the sound.

Another feature that adds to the sound quality of the PX860 is its Damper and String Resonance Hammer Response simulators, both of which better replicate the rich sound of a hammer striking a string.

Combined on top of these features is the fact that the piano is capable of 256 notes of polyphony—an impressive feat for a piano of its price which ensures that the PX860 will play any piece without flaw.

Lastly, the PX860 comes equipped with a sliding lid that can be locked in a position that projects the sound outward, adding the finishing touch on the great sound of the PX860.

Key Action and Realism of the PX860

The PX860 comes with Casio’s esteemed Tri-Sensor Scaled Hammer key action and simulated ebony and ivory keys, both of which help to replicate the feel of playing an acoustic piano as close as is possible. By taking into account the speed at which various sized hammers would move, the Tri-Sensor system is able to provide a greatly realistic key to sound result.

All said, a graded and weighted keyboard with textured keys and a Tri-Sensor system is a greatly realistic find.

Other Features and Specifications of the PX860

Some of the other things to note about the PX860 include its Class Compliant USB and MIDI connectivity, its sixty preset songs with memory space for the user to add ten songs of their own, its three built-in pedals, (which operate off of a half-damper system) its eighteen different tones to choose from, a built-in two track recorder, and a headphone jack.

As mentioned, the PX860 weighs just 37 kilograms, making it highly portable as well.

The Casio PX860 is one of the most popular digital pianos on the market today, and while popularity doesn’t always mean quality, the PX860 seems to have earned this popularity. The key action and sound of the piano are competitive with digital pianos twice its price. Though some have had issues with the durability of the piano, there aren’t many flaws to be found in the PX860, making it a digital piano that we would highly recommend to both beginners and experience pianists alike.