This Yamaha stage piano is truly one of the most versatile and powerful keyboards on the market and is the preferred choice for a large majority of serious stage performers. The key action, sound quality, and amount of features on the Yamaha CP4 is absolutely unparalleled, and the company claims that it is the best of all the Yamaha stage pianos they have ever produced. In this Yamaha CP4 review, we will take a look at all of the innovations and features that have made the CP4 such a popular choice for serious stage performers. 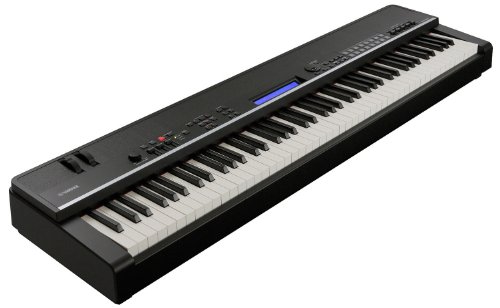 The advantages that the CP4 offers the modern performer are almost too much to list. The CP4 has an excellent key action that feels just like an acoustic piano, a rich and resonating sound, a large selection of voices, several of which were collected from a handful of Yamaha’s best concert grand pianos using state-of-the-art sound sampling technology, and a powerful list of settings, features, and modes, many of which can be accessed with just a single touch. All things considered, the CP4 is fine-tuned machine that plays and sounds absolutely incredible.

The Yamaha CP4 does not come cheap. It is one of the more expensive digital pianos that you will find. If you can afford it, though, and are serious about taking your stage performances to the next level then the CP4 is just about the best you can get for your money.
[/su_box]

No matter what style of music you play, there is a piano sound on the CP4 to fit it. The speakers on the CP4 or great, and the sound they produce is rich and resonating. In all honesty, this is the best sounding digital piano that you will ever have the chance to play.

The CP4 is equipped with a Graded Hammer action keyboard that feels almost identical to the responsiveness of an acoustic grand piano. The keyboard is equipped with two separate sensors to detect how hard the key has been pressed and play the appropriate note every time.

Unlike most digital pianos, the CP4 has wooden keys instead of plastic with synthetic ivory key tops. Down to the smallest detail, the keyboard of the CP4 feels like that of grand piano ten times its cost. If realism is important to you, you can’t go wrong with purchasing the Yamaha CP4.

Other Features and Specifications

The amount of useful features on the CP4 is almost overwhelming. If you are searching for a Yamaha stage piano that has enough buttons, dials, and sliders to let you fully adjust the sound to your own likings then the CP4 is the piano for you.

Best yet, the CP4 is designed in such a way that most all of these adjustments can be made with a single touch, allowing you to alter your music on the fly. The CP4 also comes with a large selection of premium voices, all of which can be layered and split with ease. The CP4 weighs just 48.3 pounds, making it easy to transport and comes with a sleek and elegant design that is the final touch on an already outstanding instrument.

The Yamaha CP4 is the best digital stage piano that you will find. It has been designed down to the slightest detail to play and sound just like a concert grand acoustic and comes equipped with enough features to let you customize your own unique sound. If you are a serious stage performer looking for a digital piano that will let you take your performances to the next level then the CP4 is a premium choice.