Skip to content
Home > Casio PX5S Review: An In-Depth Look At The PX5S

The PX5S is Casio’s take on an affordable, stage/music production digital piano. While it may be quite different in purpose from the other pianos in the line, the PX5S is part of Casio’s esteemed Privia line of digital pianos, meaning it comes equipped with the full amount of sound and key action boosting features found on the rest of the Privia series plus an impressive assortment of stage and music production focused features as well.

Somehow, Casio has managed to pump an extreme amount of quality and high-end functionality into their Privia series while still keeping the price of the pianos remarkably low. The PX5S is no exception to this at all. The PX5S comes with more features, a better sound, and a better key action than stage/music production pianos that cost considerably more. In this Casio PX5S review, we’ll take a look at these features as well as the various pros and cons of the instrument. 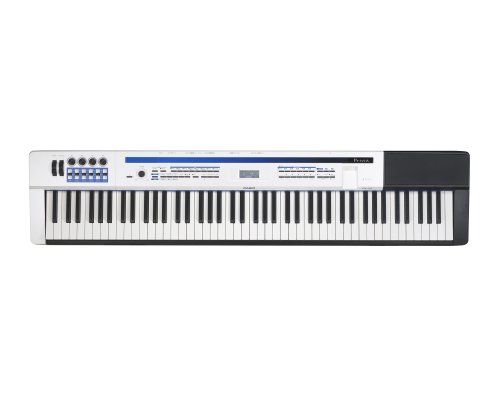 Besides its price tag, there are a lot of things to like about the PX5S. One of the main things, however, is its keyboard. Like other Privia pianos, the PX5S is equipped with the Tri-Sensor Scaled Hammer Action II keyboard, a highly acclaimed keyboard that makes it one of the most realistic feeling stage pianos available.

The other main advantage of the PX5S is its impressive number of features. From a four zone controller, to 256 notes of polyphony capability, to its powerful AiR sound source technology, the PX5S packs a lot of punch.

One of the cons of the PX5S is that it does not come with built-in speakers, meaning that you will either have to purchase studio monitors or speakers on your own or wear headphones to hear the music. Also, the PX5S’s control are quite complex and require a considerable amount of time to become proficient at using.

Sound Quality of the PX5S

Casio’s AiR sound source is well recognized by pianists everywhere as being one of the most advanced and high quality sound recording technology available, particularly great since it’s found on a series of digital pianos as affordable as the Privia series.

While the PX5S may be a little more specialized than the rest of the pianos in the series, but it thankfully still comes equipped with the same amazing sound.

I’ve only had the opportunity to play the PX5S once, but I can say from that time alone that I have absolutely no complaints about its sound. The PX5S sounds highly realistic, and its 256 notes of polyphony ensure that no notes will be cut off prematurely no matter how complicated the piece.

Key Action and Realism of the PX5S

The PX5S comes equipped with Casio’s Tri-Sensor Scaled Hammer Action II keyboard, a highly acclaimed keyboard that feels about as close to an acoustic piano as a digital piano can.

The keys have a nice response, and the increasing weight of the keys as the notes get lower is an excellent feature not found on many stage/music production. The three sensors in every key are great for providing a considerably quicker response to repetitive sounds.

Lastly, the keys of the PX5S are made from simulated ebony and ivory, giving them a much more traditional and organic texture while also better absorbing moisture from your fingers and producing far less unwanted noise than plastic keys.

Other Features and Specifications of the PX5S

In reality, there are so many music editing and stage performance features on this piano that it is almost overwhelming. Without a doubt, the PX5S was made for serious musicians who are willing to commit the time to learning how to operate all of its bells and whistles.

If you are willing to commit that time, however, then the PX5S is certainly a powerful instrument.

To name a few of its more impressive features, the PX5S comes equipped with a four zone controller that has four knobs and six sliders that can be used to control internal sounds, effect parameters, or set continuous controllers to other gear,  four programmable arpeggiators, Hex Layer tones, real-time filters, and a literal arsenal of other creative tools.

More general features of the PX5S include USB and MIDI connectivity, audio recording and playback, an attractive LCD display, a large number of instrument sounds including a few very cool, vintage electronic piano tones, and a headphone jack.

The weight of the PX5S is 14.7 kilograms, making it light enough to transport frequently for stage use.

The PX5S is great sounding and realistic feeling digital piano that happens to also be equipped with a ton of music production and stage use features.

While it would be akin to using a chainsaw to open a letter, you could easily learn to play the piano on the PX5S and never miss a beat in regards to learning on an instrument that sounds and feels like an acoustic piano. It’s this quality and versatility that set the PX5S apart.

Costing just around 1k, it is an expert’s piano at a beginners cost. If you don’t mind the learning curve and the fact that it doesn’t come with built-in speakers, then the PX5S is an excellent piano to consider.