The Casio PX-130 is very near the best, if not the best outright, keyboard that you can buy. From its sound to its features to its key action, Casio has paid attention to even the smallest details with this piano, and the results could not have been better. In this Casio Privia PX-130 review, we will take a closer look at what makes the PX-130 great and determine whether or not it is worth the investment. 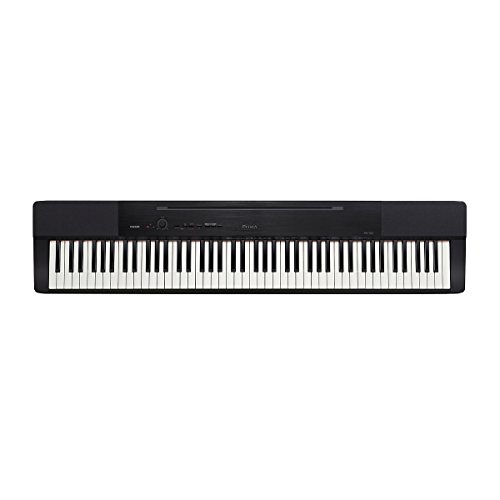 One of the biggest advantages of purchasing the Casio Privia PX-130 is the piano’s ultra realistic key action. Casio has long been a leader in engineering digital pianos that feel just like an acoustic piano, and the Privia series has been equipped with one of their best key actions to date. Along with this, the PX-130 has a great, full sound and plenty of features that make it suited for both music production, stage performances, and learning how to play the piano.

To begin with, the PX-130 is a bit more expensive than many keyboards you will find. Its versatility means that it is an instrument that can serve you across several different types of uses and applications, so if you can afford it, the piano is worth the extra cost. Also, some reviewers have mentioned a subtle squeaking noise when the keys are pressed, though this will probably go away after the piano has been played for a while.

Four separate layers of stereo piano samples integrated together using Casio’s renowned Linear Morphing System were used to create the sounds produced by the PX-130, resulting in a highly realistic grand piano sound. The PX-130 has 128 notes of polyphony, making it able to play even the most complex pieces without dropping off any notes prematurely.

For an added touch of realism, the PX-130 uses a system called Acoustic Resonance DSP in order to simulate the sound of open strings when the dampers are raised by the pedal. Along with all of this, the PX-130 comes equipped with a high-quality set of speakers that are able to pump out as much volume as you will need. For a digital keyboard, the sound of the PX-130 is extremely impressive and almost certain to satisfy even the most trained ears.

The scaled, weighted keyboard of the Casio Privia PX-130 is simply a joy to play. On an acoustic piano, the keys at the lower end have more resistance than the keys at the higher end. This is a detail that many digital pianos fail to replicate.

The PX-130, however, has a scaled keyboard that perfectly mimics this affect, resulting in a key action that is far more expressive and realistic than most any you will find. The keyboard has an adjustable level of responsiveness and features Casio’s award-winning Tri-Sensor technology that accurately detects how hard the keys are pressed and produces the appropriate volume every time.

Really, the only knock against the PX-130’s keyboard is an almost inaudible squeakiness that goes away with time. Other than that, this is one of the finest key actions you will find.

Other Features and Specifications

The PX-130 comes with 16 built-in voices, and if you read through a Casio PX-130 review you will see that they all sound quite realistic. These voices can also be split or layered. The PX-130 comes with a music library of 60 songs that you can use to aid you in your practice. The piano has inputs/outputs for USB, two connections for headphones, a damper pedal, and a pedal connector as well as two 8W speakers.

The PX-130 is a top-rate digital piano with a key action and sound quality that is simply unparalleled today. This is piano is a little pricier than some of the other options available, but if you are looking for the most versatile, realistic keyboard that you can find, the PX-130 is the digital piano of choice.

Disclosure: PianoReport.com is a participant in the Amazon Services LLC Associates Program, an affiliate advertising program designed to provide a means for sites to earn advertising fees by advertising and linking to Amazon.com

Scroll back to top